Guided by Spiritual grace, with joyful noise, the First Contact Reconciliation Collaborative (FCRC) continues to take up Call To Action sessions, testing individual & corporate witness, and threshing actions toward righteous relations with all of Creation.

Guidelines for those Seeking Healing Relations with Indigenous Peoples: Lessons of Lenapehoking

With humility, allies of local, sovereign Native Nations faithfully embrace lifeways of accompaniment toward lasting peace and friendship. We invite individuals and corporate structures to consider decolonizing acts that include, yet are not exhausted by the following:

We trust the sovereignty of tribal nations – each Native Nation’s total authority over its own identity, culture, and lifeways.

We are focusing on three different areas of work that go beyond land acknowledgements with monthly and quarterly meetings this year. These are:

Honoring the Promise of perpetual peace and friendship between Lenape (who have remained on their original homelands) and Philadelphia Yearly Meeting Friends from the Treaty of Amity, 1995.

More info and resources on this topic:

Change the Mascots: Educating individuals and schools on how they might choose to support campaigns to remove harmful mascots in New Jersey and Pennsylvania. Educating ourselves and others on national campaigns that benefit indigenous peoples.

More info and resources on this topic:

Truth and Healing – seeking oneness with Friendly investigators re-story-ing truths: Engaging in truth-telling and healing through storytelling, sharing, and joining together to understand and know our truths. This means looking at meeting history, burial records and researching Quakers roles in colonization past and present and how that has affected Native Peoples.

More info and resources on this topic

Some cautions as meetings, individuals and quarterly meetings approach this work.

Queries for your Meeting or groups

by Interior Secretary Deb Haaland (Laguna Pueblo) on June 22, 2021, acknowledging our complicity in the historic trauma of the boarding school era; this compliments the work of the National Native American Boarding School Healing Coalition inviting churches to be involved in healing a broken place of our shared history – yes, Friends were involved…how might Friends today address the deliberate policy of ethnocide and cultural genocide of the ~16 – 30 IBS under their care, no fewer than 25,000 Indigenous children, impacting their ancestors and contemporary Tribal Nations and today’s Native American families? How might we look to prevent this from ever happening again?

Along the path of education, companionship & allyship, we are mindful of and encourage self-care – spiritually, mentally, emotionally, and physically. A list of resources is made available by The Native American Boarding School Healing Coalition.

Even though some [mascots & imagery] are said to be in an effort to “honor our people,” most are insulting and racist and all reinforce insensitivity and stereotypes. Often our children must visit or attend schools where their race is being caricatured on walls, shirts, jackets and flags. Our proud tribal names, villages, heroes and even rituals are turned into marketing tools and demeaned. Sadly, it has been our experience that when we try to educate such offenders, we are verbally… and sometimes even physically… attacked. Having such mascots is NO HONOR… It is an INSULT!

Tara Houska, Anishinaabe and a member of Couchiching First Nation, is an attorney from Washington D.C. and founding member of  Not Your Mascots. Tara spoke with the  Dodging Bullets production team to discuss the R-word and historical trauma.

Maulian Dana, Penobscot Nation Tribal Ambassador, Indigenous Peoples in Maine are Not Mascots on TEDxDirigo; and letter/ petition ” to remove the racially insensitive and harmful Indian mascot in the Mahopac school district.” The outcome by the state of Maine – Act Prohibiting the Use of Native American Mascots by Public Schools in the Commonwealth

National Coalition Against Racism In Sports and Media

Mission Statement: The National Coalition Against Racism in Sports and Media (NCARSM) will educate and when necessary confront the individual, institutional and governmental influences that propagate racism in sports and media.

National Museum of the American Indian

From the National Museum of the American Indian (NMAI): For decades, Indigenous people have worked to end the use of racist mascots and other racially charged images. On Monday, July 13, 2020 the Washington, D.C., NFL franchise, whose name has long been a dictionary-defined slur against Native Americans, announced they will retire the team’s name and logo.

While this is, of course, a great relief to the people and organizations that have worked tirelessly to see this day become a reality, there remains concern about what the team’s new name and mascot will be. The museum’s leadership—Director Kevin Gover (Pawnee) and Board of Trustees Chair Bill Lomax (Gitxsan)—released a statement on ending the use of racist mascots and images.

In addition, Director Gover wrote an opinion piece that was published by the Washington Post….

In a recent article historian Prof. Phil Deloria, a museum trustee and the first tenured professor of Native American history at Harvard, discusses the parallels between Native mascots and Confederate statues. 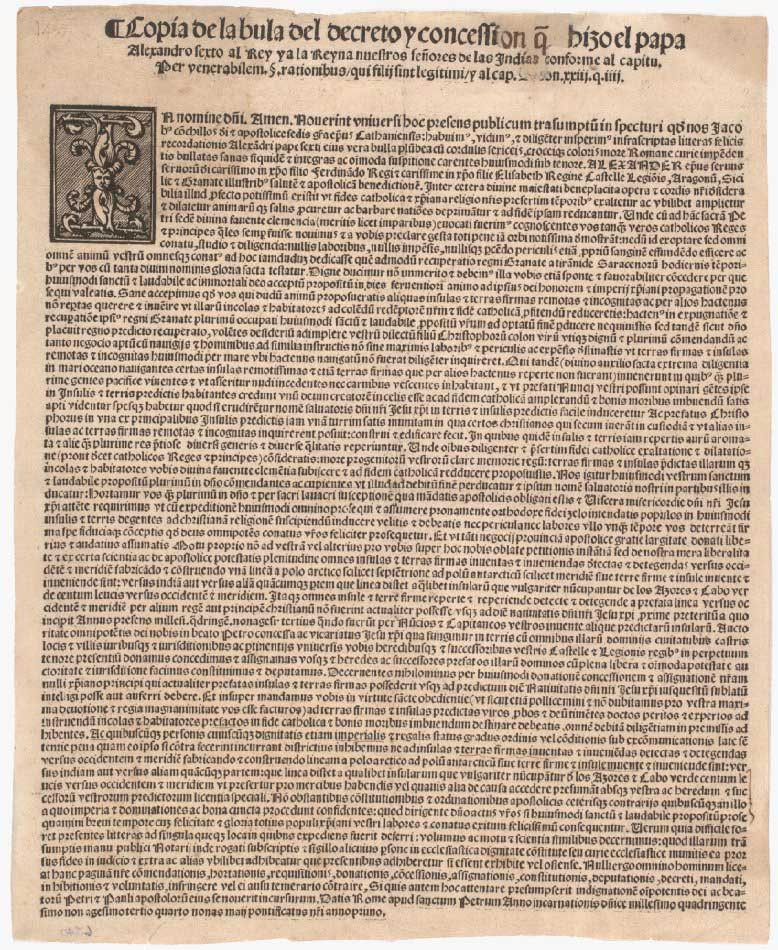 “…invade, capture, vanquish, and subdue all Saracens and pagans…to reduce their persons to perpetual slavery and to take away all their possessions and property.” 1452 from Pope Nicholas V to King Alfonso V of Portugal.

The Papal Bull “Inter Caetera,” issued by Pope Alexander VI on May 4, 1493 (pictured)

Position Statement on “Indigenous Peoples Day,” from the Alliance of Colonial Era Tribes

These Cities (and States) That Have Abandoned Columbus Day

The Drake Manuscript titled Histoire Naturelle des Indesan, paintings and descriptions documenting the plant, animal, and human life of the Caribbean late in the sixteenth century. Spaniards had already begun to exert influence over the indigenous people of the area when explorers from England and France arrived, among them Sir Francis Drake. Landmark Documentary – Doctrine of Discovery: Unmasking the Domination Code by filmmaker and Director Sheldon Wolfchild (Dakota) and Co-Producer Steven Newcomb (Shawnee, Lenape). A one-hour screening of a little-known history based on Newcomb’s thirty years of research.

Thanksgiving for Everyone, NCAI Resolution

Words That Come Before All Else,  filmed on location at the Onondaga Nation School in Onondaga Nation, focuses on the purpose and uses of the Haudenosaunee Thanksgiving Address.

The Wampanoag Side of the First Thanksgiving

Thanksgiving Promotes Whitewashed History, So I Organized Truthsgiving Instead

Dawnland is a documentary investigation of the devastating impact of Maine’s child welfare practices on the Maliseet, Micmac, Penobscot, and Passamaquoddy, collectively known as the Wabanaki, “People of the Dawnland.” The presumption by the dominant culture holds that “assimilating into white society would improve quality of life and give [the Wabanaki children] a better future.”

We are mindful of three guiding questions:

We further wondered about:

As requested, FCRC has gathered more information, some specifically addressing cultural misappropriations, stereotypes, and myths. We lean-in with the Wabaniki Peoples as they continue their truth-telling and healing.

Friends tested and affirmed the work of our clerks and our elders, since being tasked during Annual Sessions in July 2014, to help discern a way forward in addressing many -isms including-racism, sexism, genderism and classism. Friends also heartily affirmed that as a Yearly Meeting we: Commit to increase our consciousness as Friends about the intersection of privilege and race in our culture and spiritual community. We know our knowledge is often limited by our own experiences and that we have much to learn from each other and from outside resources. Commit to move forward with our entire community. The yearly meeting is the community of all our individual Friends and monthly meetings and this work needs to be done with the involvement of all of us. Commit to integrate this work into what we do in an ongoing way at the yearly meeting level. We want this work to become part of the fabric of what we do whenever we get together as yearly meeting members and attenders.

The First Contact Reconciliation Collaborative finds the Philadelphia Yearly Meeting Minute of Action consistent with their inner light. Toward elimination of our “…isms” and walking a path of change, this collaborative is mindfully of:

In order to educate for social change we must engage the spirit and, in order to do so, we need to decolonize ourselves. ~R.A. Shahjahan

Extract from the Abington Peace Meeting

“Our friend has spoken of the barbarities which have been practiced towards the Indians, and of their present condition of degradation in contrast with their condition when William Penn landed on this continent. It occurred to me to ask if Friends were truly alive to their situation and to the fact of the treatment they have received from the agents who have been employed by the government and who have wronged them so shamefully, whether there would not have been more frequent and more earnest protests and appeals to the government on their behalf. We have not considered the wrongs of Indians as our own. We have aided in driving them further and further west, until, as the poor Indians said, ‘You will drive us away, until we go beyond the setting sun.’ I wonder if, with the profession we Friends have made, of care for the Indians, we have been active enough in our labor.” ~Lucretia Mott, Abington Peace Meeting, 1869

Query: Like Lucretia in 1869, we wonder whether Friends are “active enough in our labor”?

What is a Collaborative?

Collaboratives are networks of individual Quakers who work jointly on common interests specific to themselves. Collaborative work, witness, and activity are distinct from corporate ministry of Philadelphia Yearly Meeting.

Though many individual Quakers join together in addressing social concerns, Quakerism is a faith of continuing revelation and PYM is a ‘big tent’ with many opinions.